October 8, 2014 marked the second total eclipse of a “tetrad” – a series of four lunar eclipses each six months apart.  In April, we stepped outside our front door just before midnight to catch a glimpse.  This time, the eclipse was scheduled to appear in the western sky, behind the trees and ridgeline of our hillside home.

October has been averaging 10 degrees above normal this year, and the weather on Marys Peak was 60 degrees with clear skies and calm winds.  So along with housemates Helen and Sean, I headed for the summit meadows with sleeping pad in hand.  We set our alarms for the start of the eclipse and drifted off to sleep beneath the full moon. 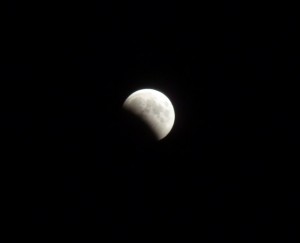 Eclipses move slowly, so perhaps the best way to observe them is to drift off to sleep and wake up every 10-15 minutes or so to check on the progress. 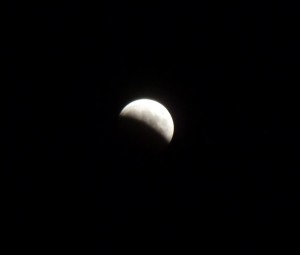 A few minutes later. You can see the size of the Earth's shadow based on the curvature of the eclipsed portion. 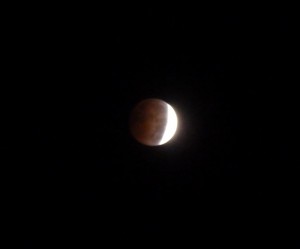 As the eclipse approaches totality and the brightness drops, the eclipsed portion of the moon becomes visible, tinged red from light passing through Earth’s atmosphere.  This time the moon passed through the edge of the Earth’s shadow, so one side remained noticeably darker. 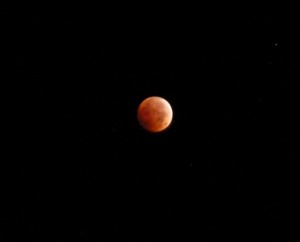 Total eclipse. One-second exposure held as still as possible with camera balanced on binoculars on pillow. One of the stars close to the moon is actually the planet Uranus.

With the moon in shadow, the previously-muted night sky popped into dazzling brightness, and I found myself exploring the Orion nebula and the Milky Way with binoculars.  As the moon reappeared, I drifted back into sleep, awakening to the first light of dawn over the Cascades. 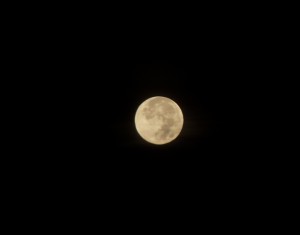 Cirrus clouds caught the first rays, lighting up the sky in hues of pink and orange.  These are usually impossible to capture on camera, but I got lucky this time… 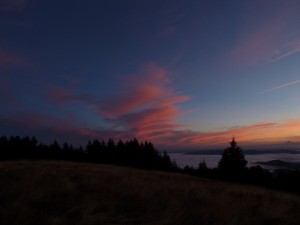 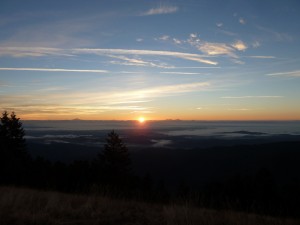 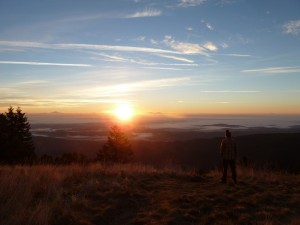 Sean and sunrise behind Mt. Washington