Twelve days ago, on the first 60+ day of the year, I inspected three of our hives.  Today, at 63.4 degrees, I convinced Elizabeth to take off work early to examine the remaining two.  The very good news is that all five hives are healthy and in full spring build-up mode.  That aside, it’s interesting how different they are. 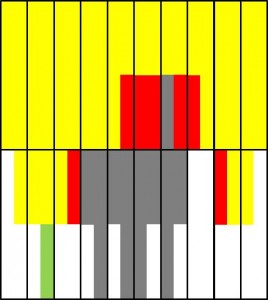 Hive #1 started as a nuc on April 17th of last year, our return to beekeeping after our sole overwintering hive died in February.  It built up well and gave us a full super of honey, but had very high late-summer mite loads.  Three Apiguard (thymol) treatments knocked back both the mites and the bees, but while the bees recovered in time to establish a good winter cluster, the mites thankfully stayed absent.  These Carniolan-type bees overwintered in a small cluster before cranking up in February, and they are now our second-strongest hive judged from activity out front.  The diagram above is from March 1 and we haven’t inspected since then.  I would guess that much of the empty space is now pollen and brood, as is the case with #5 below. 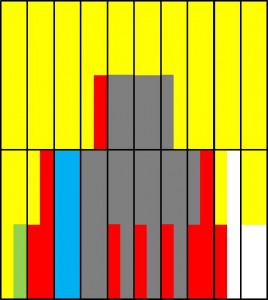 I’m putting #5 after #1 because these hives look pretty similar at the moment.  #5 started as a nuc from Old Sol on May 19th, 2012, when we met John Jacob at a freeway gas station at 1:30 am to pick them up.  (He was taking a load of nucs to Portland for delivery.)  I was a bit disappointed by the number of bees inside – only about two frames of brood/bees, one frame of honey, and two nearly-empty frames.  With their small starting size and late May arrival date, they weren’t able to produce surplus honey, though they did nicely fill out a box for themselves.  These bees had moderate mite loads in August, and despite their “survivor” status we elected to give them some Apiguard which did a number on the mites with little impact on the bees.  They went into winter with the smallest cluster of any of our double-deep hives, and #5 had the least winter entrance activity.  I was a bit worried about them, but for no good reason it turns out as they are now in full build-up mode and nearly filling both boxes with bees.

I call these our “smart bees” – smart enough to shrink their population for winter so as to save their honey for spring build-up.  They have a textbook hive organization, with brood dead-center, plenty of fresh pollen stores, and still 2/3 of their winter honey.  The one oddity of this hive is a solid frame of drone brood.  This started as a foundationless frame which was drawn entirely to drone-size comb.  We noticed it last fall but left it in as it had honey in it at the time.  Today it was filled instead with a good-sized batch of developing drones.  We pulled the frame of drone larvae to feed to our chickens and replaced it with a new foundationless frame.  Perhaps they will make more drones, but at least this way they have an opportunity to draw worker-sized comb if they choose. 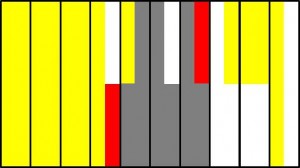 Hive #6 started as a tiny one-frame swarm that moved into one of my bait hives out at MarkliAnn’s farm around the Summer Solstice.  Their recently-virgin queen was hard to spot at first, but she was laying and they built up steadily through the flow to 3-4 frames of brood with minimal stores.  As they had almost no mites, we didn’t treat them, but we did feed them lots of sugar syrup in the fall as they built up too late to take advantage of the June-July nectar flow.

We worried about them a bit over winter, but without good cause as they came through with plenty of honey remaining.  Last weekend we gave them a second deep box with foundation and moved some of the honey above the brood nest to convince them to build upward. 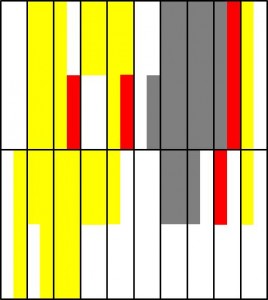 Hive #2 started on May 6, 2012 as a package from local beekeeper extraordinaire Kenny Williams, shaken into our bleach-treated deadout from the previous winter.  They established a brood nest in one side of the top box and have kept it centered there ever since.  While they did give us some extractable frames in the super, they failed to fill out the far side of the lower boxes, so we fed them a lot (75+ lbs) of sugar syrup in the fall.  With a marked yellow queen, we assume they are Italians, and they have the annoying Italian trait of going into winter with a huge population.

Apiguard had no effect on the mite population in this hive, and going into fall we noticed a number of bees with deformed wings, a symptom of the mite-vectored Deformed Wing Virus (DWV).  I gave them an oxalic acid drench in early December, which resulted in an epic mite drop in the thousands and very few live mites remaining.  Despite going into winter with the largest population, these bees are building up somewhat more slowly than our other hives; perhaps this is an after-effect of high fall mite loads.

When I inspected them on March 1, I was worried by the amount of drone brood present, thinking it might signal a failing queen.  When I looked in today, all of the newly-capped brood was workers in a good pattern.  I’m wondering if perhaps this queen was slightly inbred and cycles through batches of same-type semen that produce diploid drones.  Much of the space that was empty on March 1 is now filling up with eggs, young brood, and pollen.  This hive is still a candidate for re-queening, though the final decision will depend on how things look in another 2-4 weeks. 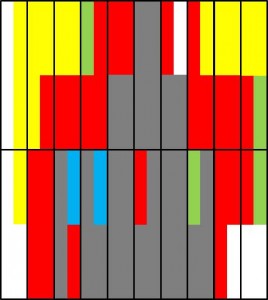 Hive #3 started as a big prime swarm that moved into a bait hive over at Trevor’s house on May 9, at the beginning of the swarm season.  They have always been a bit odd compared to the others.  For one, they are extremely defensive.  While our other hives can be testy at times, these will follow us all the way back to the house forcing us to remove our veils with care.  They built up fast but created a somewhat disorganized broodnest, and during the honey flow had perhaps the largest population of any hive but didn’t produce any surplus.  They did fill their upper semi-deep with honey, enough that we didn’t have to feed them much in the fall.  As with #2, Apiguard had little effect on this hive’s mites, so we hit them with oxalic acid in early winter.  The mites were never quite as bad in this hive, and we didn’t see any deformed-wing bees.  These bees were our most active winter flyers, and I thank them for carrying pollen during a few warm hours on January 4th, allowing me to win the state beekeepers’ association pollen contest (for the first photo of bees carrying pollen in the new year).

I’m not sure what this hive is thinking at the moment.  Nearly every possible surface is packed with bees, and a good number have moved up into the super added just three days ago, already propolizing and beginning to store nectar and pollen.  They have brood on nine frames (!) and more pollen (six solid frames) than I have seen in any hive ever.  This is perhaps not surprising as they have been carrying pollen full-force at every opportunity since January, but I’m not sure why they think they need so much stored going into a season when pollen will be abundant.  They are nearly out of honey, so if we get a week or more of cold rain we might need to feed them.

On the upside, they might make surplus honey from early spring flows.  Or they might just fill the super with brood and pollen.  It seems to me that these bees are genetically programmed to use all available resources to make more bees.  They arrived as a big early swarm, and they are well on their way to throwing a big early swarm this year, perhaps even in April if the weather is good.  I might try opening the broodnest to stave off swarming, but perhaps the best course of action will be to split them in early April into two hives, giving each a new queen that has been selected for anthropic “fitness” (gentleness and surplus honey production) rather than ecological fitness (reproduction of the colony).

In case you’re wondering why there is no Hive #4, there was for about four months last summer.  Hive #4 was a medium-sized baited swarm that arrived with a case of European Foulbrood that worsened with time until the colony died.  I don’t plan on reusing the number; our next hive will be #7.