No, not the events that we all are watching these days, but the Olympic Mountains of northwestern Washington where I spent last weekend hiking with Steve and Nora.  We did two overnight, 9-10 mile trips, the first one along the ocean and the second in the high mountains.

It was about 200 miles from Olympia, where I got off the train, to Ozette Lake in the far northwest corner, but when we got there we found at least a hundred cars in the parking lot.  It seems to be a popular spot.  We set off for Sand Point, planning to hike three miles up the coast to Cape Alave at low tide. 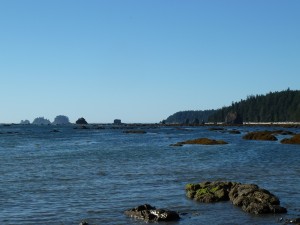 There are very steep trails with ropes leading over headlands for use during high tide.  The tide was plenty low to go around, but we decided to try the ropes for the challenge of it. 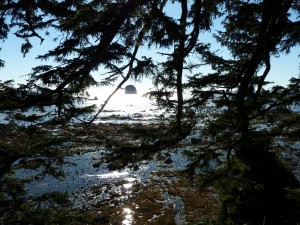 And in the fire appeareth the tablet which bore the Commandments... 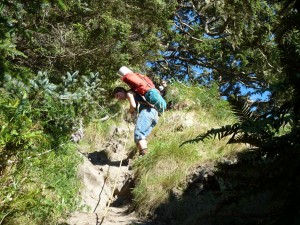 Nora scrambling down from the headland. 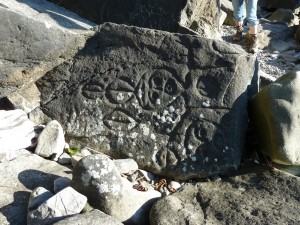 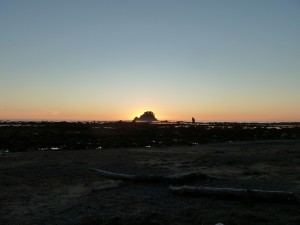 The coast in this area is strange – narrow rocky beaches above a half-mile-wide platform of rock that is exposed at low tide and connects the mainland to rocky islands covered with trees.  The next morning we had an exceptionally low tide, so we explored out among the rocks. 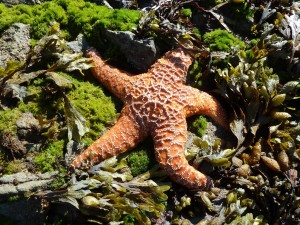 A creature waiting for the tide to rise.

We hiked out as the weather warmed, becoming a bit uncomfortable for backpacking.  This was a good day to be up north, as it was 99.3 in Corvallis but only low- to mid-80s where we were.

After stopping in Port Angeles to replace my crapped-out water filter, we drove up the constant-grade Hurricane Ridge road to 5000 feet, then turned off on an eight-mile cliff-hugging one-lane gravel road to Obstruction Point at 6100 feet.  From there we started a 9-mile loop down Badger Valley, up Grand Valley, and along a ridge back to the car. 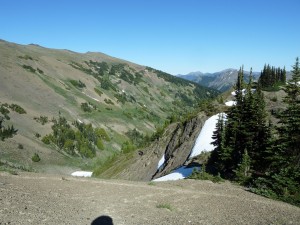 Looking down Badger Valley from 6100 feet. 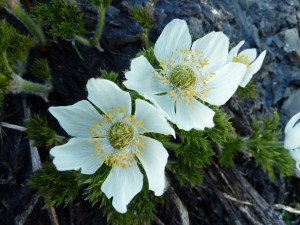 Western Pasqueflower, Anemone occidentalis, in an area recently melted out. 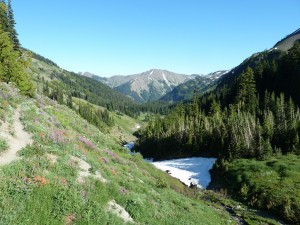 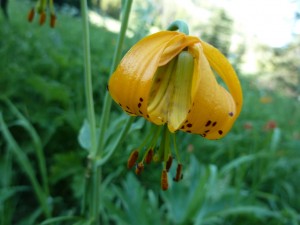 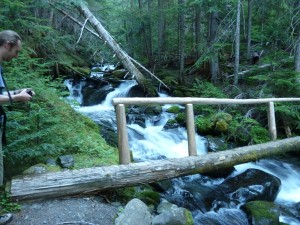 The lowest point of our hike, crossing Badger Creek at 4100 feet.

We camped at Grand Lake, a most beautiful spot inhabited by four deer (two does, one buck, one fawn) that had become accustomed to humans and continuously poked around the edges of our camp. 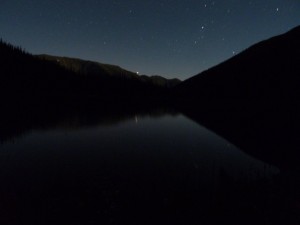 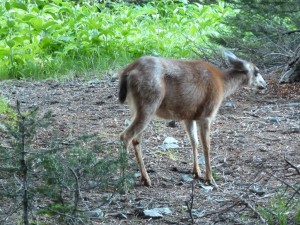 One of the too-tame deer at our campsite. 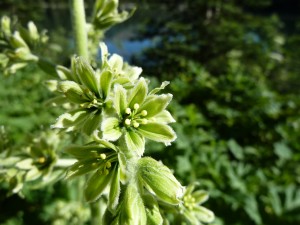 Veratrum viride, Indian Hellebore or Corn Lily, a plant that brings back fond memories of Colorado. 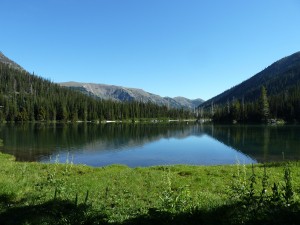 Grand Lake in the morning sun.

As we hiked out, we made a side trip to Moose Lake, another popular camping spot, where we found this goat munching on alpine grass. 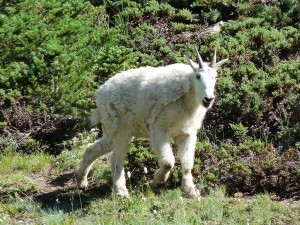 We knew we had 1500 feet of climbing ahead, but we didn’t know it would all happen in less than a mile, about 10-15 exposed switchbacks in the hot sun.  I drank through about 2 1/2 liters of water on the climb and realized that I’m a bit out of shape. 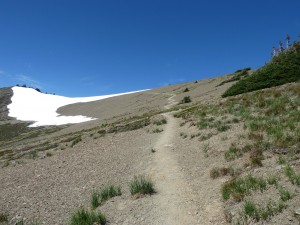 At the top of a grueling 1500-foot climb in less than a mile. 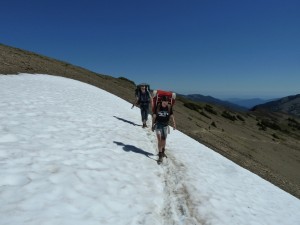 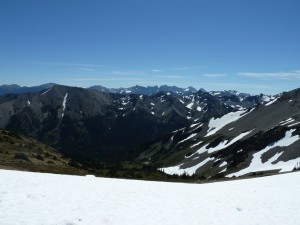 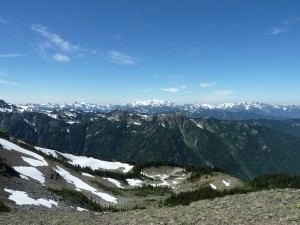 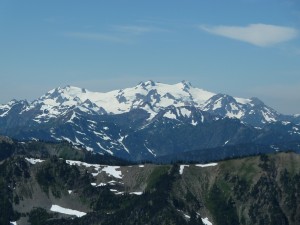 Mount Olympus, at 7980 feet the highest mountain on the Olympic Peninsula. 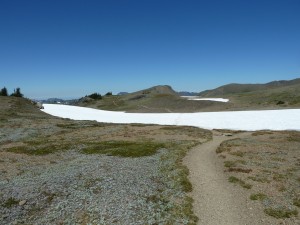 Upon arriving back at our car, we made our way back to Olympia, stopping at Port Townsend and at the Fish Brewery.  We made it to the station about two minutes ahead of the train.