Yurting on the sunny side

Last year a group of us took off the weekend after finals for three days on the sunny eastern side of the Cascades, sleeping in yurts at Tumalo State Park and skiing/snowshoeing during the day.  We enjoyed it so much that we did it again this year from December 11 to 13.  Different folks arrived at different times, but in all we had ten people: Kelly, Kevin, Katie and James, Rosalie and Andrew, Ebba and John, and of course Elizabeth and myself.

Last year the weather was warm and rainy.  This year we had the unending high pressure that keeps the valleys in fog and the mountains in bright sun.  The only downside was a relative shortage of snow – only the highest elevations had enough for skiing and the snow there was crusted and icy.

We shared food and music in the evenings; perhaps my favorite part was rocking out on the double-barrel cedar flute with drum, fiddle, and Kelly’s foot-tapping as accompaniment.  We went through most of the songs we knew and only stopped when the camp host shut us down at 10:30.  I don’t have any pictures from the yurts or the campground, but I can probably dig up a few from my friends.

On our second day we headed to Dutchman Flat, at 6200 feet, for cross-country skiing.  We chose an “intermediate” trail with some short climbs and descents that caused many wipe-outs on the icy snow.  But the beautiful weather made up for it. 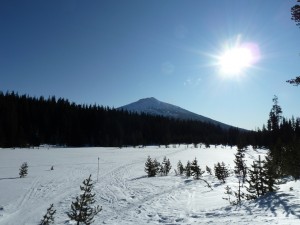 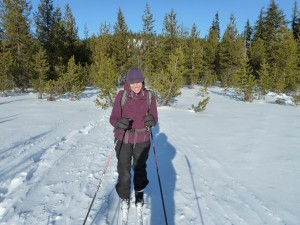 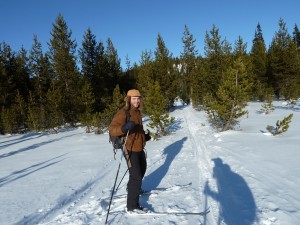 The last part of the trail followed the closed-in-winter Cascade Lakes highway, which is groomed as a ski and snowmobile superhighway.  Easy to coast along in the shadow of the Three Sisters. 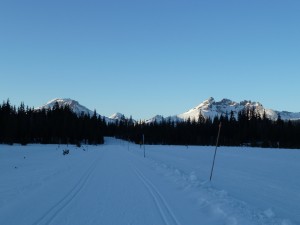 South Sister on the left, with Middle and North Sister behind. Broken Top on the right.

On Tuesday we left our beloved yurts behind and set out for snowshoeing on Santiam Pass and a soak at Cougar hot springs.  The weather was amazing – 33 degrees with no wind and bright high-altitude sun felt more like 60 degrees – comfortable with a sweater and no hat.  For the first half through an open burned-over area we didn’t even wear our snowshoes as the crust was strong enough to support us. 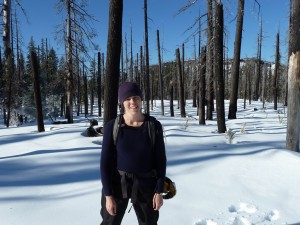 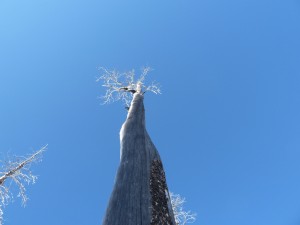 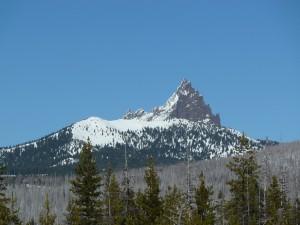 The trees were covered in fine ice crystals which drifted down as the temperature rose. 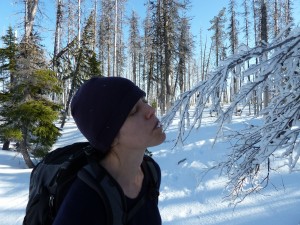 I don’t have any photos from the hot springs, but we all enjoyed it despite our stay being cut short as the rules forbid after-dark soaking.  We reconvened at the Pizza Research Institute in Eugene for some most delicious unusual pizza (with spiced butternut squash as a main ingredient).  As it turned out we missed a cold 20-degree night in Corvallis, and we returned to find an inch of ice on the hot tub.  We burned through about 80 pounds of wood to get the house back to a comfortable temperature.