Despite having been up Marys Peak the previous evening, I convinced Liz it would be worthwhile to get up at 5 am and drive up out of the fog to catch the total lunar eclipse.  As it turned out, at least 20 other folks had the same idea – more people than I have ever seen in the parking lot on the mountain.  The inversion that kept the peak warm had ended, replaced by a stiff 30 mph southwest wind at about 32 degrees.  Clouds were pouring in off the ocean, with their tops at about 3500 ft – just low enough that we still had a clear view of the sky from on top. 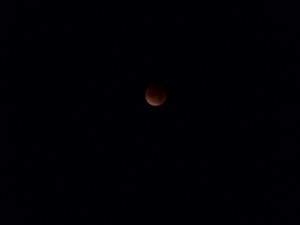 Moon in total eclipse. As this was a non-central eclipse with the moon at the bottom of Earth's shadow, the bottom stayed a bit brighter.

We hiked to the summit for the sunrise, laying low in the grass with snowpants and down jackets to keep warm in the chill moist wind.  The view across the undulating, flowing cloud tops to the Cascade crest silhouetted against the sunrise glow was one of the most incredible sights I have witnessed. 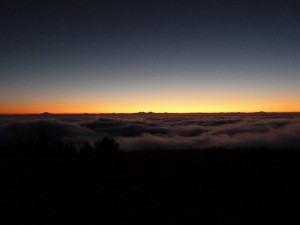 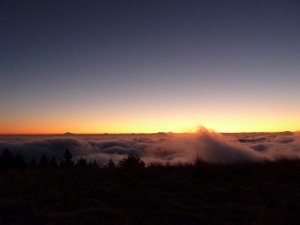 Meanwhile, in the west, the moon was beginning to emerge from Earth’s shadow. 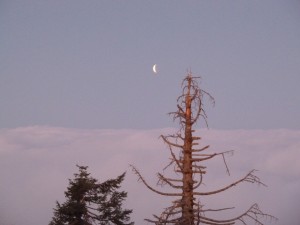 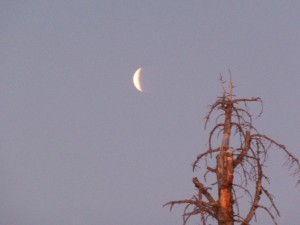 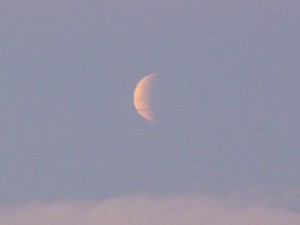 Partial eclipse. Almost like a crescent moon, but wrong time of month.

As sunrise approached, the clouds were rising, occasionally reaching our level and immersing us in fast-moving fog.  As it happened the sun peeked above the horizon at 7:37:30 am, just as the clouds engulfed the peak in a cold whiteness. 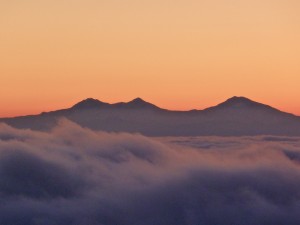 Zoom in on the Three Sisters in sunrise glow. 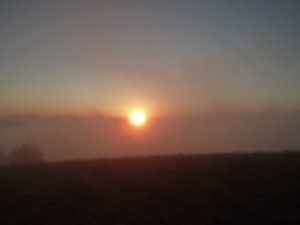 Sunrise! Visible for about 30 seconds. 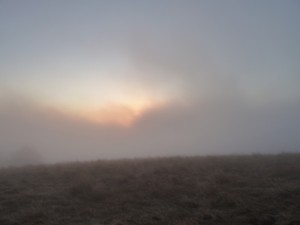 Gone behind the rising clouds.

We got home just as our housemates were waking up, and in time to kill our remaining two turkeys – a hen and a tom.  The cold rain of the day before Thanksgiving inspired us to limit our turkey slaughter to two, with the other two to wait for a dry day after Liz’s return.  The process went smoothly, and the birds weighed in at 10.75 (hen) and 19.75 (tom) pounds.  We will miss the gobbling and entertainment, but we won’t miss the big feed bills. 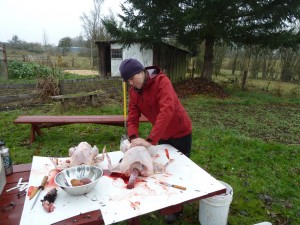 Liz getting the last of the guts out of the tom turkey.