I don’t have a complete photo record of the Thanksgiving weekend, as I’m waiting to get pictures on others’ cameras.  There are plenty of pics of the turkey slaughter, but as none of them are mine I’ll cut to the chase and report that our holiday bird was 19.25 pounds and has provided four solid meals since the big dinner.

On Thankgiving Day John and Ian (Ebba’s brother) took the boat out on the Willamette River, and I took Ebba’s dad mushroom hunting near Alsea Falls.  We didn’t expect much this late in the season, but we came home with a good collection of chanterelles and a few hedgehog mushrooms. 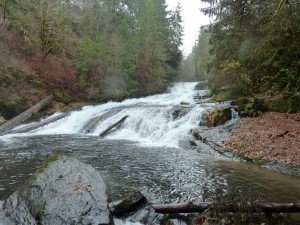 Thanksgiving dinner had fewer guests than we originally planned for but still a good group with Ebba’s folks and Sierra, Jason, and kids.  Two-year-old Timothy provided entertainment (and occasional annoyance) continuously running around and playing with everything within reach.

The next day – our first rain-free day this week – I did a 24-mile bike loop over Dimple Hill, returning by way of the lab to start some cells growing. 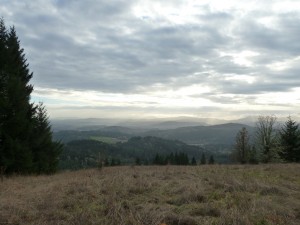 The Cascade peaks are not usually visible from Corvallis due to clouds in the winter and haze in the summer.  I hadn’t even realized the Three Sisters could be seen from here until I saw them glowing on the horizon. 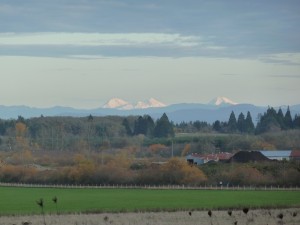 On Saturday morning the men went out trap shooting, and since I’ve never fired a gun and wanted to try it I tagged along.  Dave (Ebba’s dad) has all of the photos of me shooting, so I’ll post a few when I get them.  While it is exhilarating to fire a weapon, my overall impression of trap shooting was as a fairly boring and consumptive sport – not something that will become part of my weekend routine. 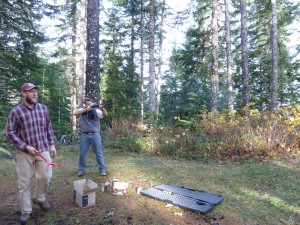 When traveling in the forest after a windstorm, one should always carry a chain saw…

We were stopped just short of our destination by this 10″ tree – just slightly too large to move or drive over. 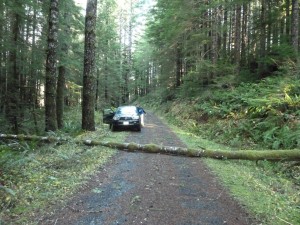 Should have brought a chain saw 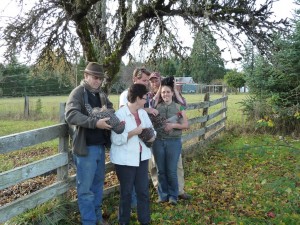 The voles have found our beets again – my first trap setting last night caught one, but there are probably more in the tunnels.  We gave our largest beet to Sierra, but not before taking a picture.  Many are over two pounds, and all are still delicious and not at all woody.  Probably more beet biomass than we can eat in a winter, unless the voles help… 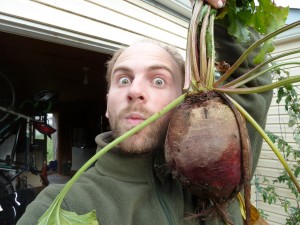